Healthy Cities Tutoring helps kids who struggle to succeed in school. Community volunteers provide one-on-one tutoring and mentoring for children to improve their academic performance, engagement in learning and self-esteem.

Healthy Cities Tutoring began in 1996 as a dream of school and community leaders seeking to support children and families in San Carlos. This intergenerational program was piloted at one elementary school in early 1997 and quickly expanded to provide support to struggling students at seven schools in the San Carlos School District.

In January of 2014, services were initiated at Clifford School in the Redwood City School District. Healthy Cities Tutoring was invited by the school principal to support the at-risk students in kindergarten through eighth grade. In 2015 services were expanded to Connect Community Charter School and Fair Oaks Community School in Redwood City in partnership with the Sheriff’s Activity League.

Recognizing the significant need for the program for the hundreds of children and families that benefit from the one-on-one support provided by the community volunteers, the program was reestablished as a 501(c)(3) nonprofit organization in September 2011. Health Cities Tutoring is committed to ensuring every child has the support necessary to achieve to their full potential; we know that their achievement creates a healthy, safe and thriving community.
Back to top of page

Healthy Cities is a 501c3 and depends on your tax deductible donations. Please donate !

Read our news blog to keep informed about what's happening at Healthy Cities!

Thank you to our volunteers! 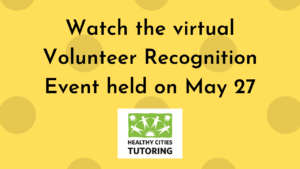 Please send us an email if you want to subscribe to our quarterly newsletter and other occasional communication.
.